No Game No Life (Light Novel)

View source
watch 01:36
We're Getting Mutants in the MCU - The Loop
Do you like this video?
Play Sound

This is a list of the all the No Game No Life light novel volumes, written and illustrated by Yuu Kamiya. There have been eleven volumes (including the Gaiden Volume) released to date.

Summary
The original light novel that started the phenomenon!

In this fantasy world, everything's a game--and these gamer siblings play to win! Meet Sora and Shiro, a brother and sister who are loser shut-ins by normal standards. But these siblings don't play by the rules of the ""crappy game"" that is average society. In the world of gaming, this genius pair reigns supreme, their invincible avatar so famous that it's the stuff of urban legend. So when a young boy calling himself God summons the siblings to a fantastic alternate world where war is forbidden and all conflicts--even those involving national borders--are decided by the outcome of games, Sora and Shiro have pretty much hit the jackpot. But they soon learn that in this world, humanity, cornered and outnumbered by other species, survives within the confines of one city. Will Sora and Shiro, two failures at life, turn out to be the saviors of mankind? Let the games begin...! 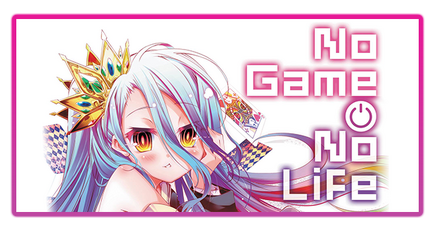