No Game No Life Wiki
Register
Don't have an account?
Sign In
Advertisement
in: Light Novel, Volume
English

It Seems the Gamer Siblings are Resting for One Turn

An official English translation was released under the name No Game, No Life Volume 9: Looks Like the Gamer Siblings Are Skipping a Turn! was published on October 29, 2019.

Gamer siblings Sora and Shiro have at last defeated the Old Deus Holou, and now they're switching gears: their next endeavor is to make Holou the number-one idol pop star in all of Disboard! But amid the chaos of their pet project comes a strange message from the representative of the 10th-ranked race, the Ex-Machina... Is another arduous battle on the horizon for Sora and Shiro?!

Sora and Shiro shut down the Kingdom of Elkia to prioritize setting Holou up as an idol. Sora and Shiro, as her producer, pressure Holou to have her improve her singing and stage performance. Holou cannot comprehend why, but she does anyway.

Steph expressed that the country felt uncertain about their king’s decision. Sora explains that Imanity has no move left and is taking a break as no one will be willing to confront them directly, especially after their win against an Old Deus. He insists that the other races will most likely be challenging Elkia's alliances rather than them. Sora also added that Elven Gard is now in shambles due to multiple causesーBlank used Fiel to feed false information after the game with the Eastern Union, Chlammy & Fiel infiltrating and turning several elven nobles against each other and Sora spelling out the traitors, including Fiel, in their countryーOther races should be worried about possibility of internal conflicts within themselves.

As Holou finishes her debut performance in the King’s Castle, Sora’s phone rings, followed by a group of 13 strangers showing up via dimension manipulation. They turn out to be Ex-Machina. 2 of the 13 include: Einzig, a male Ex-Machina, the current administrator of the Ex-Machina (as well as the race representative) and Emir-Eins, a female Ex-Machina, who is a formal cluster commander. The other 11 are female Ex-Machina.

When everyone expected the Ex-Machina’s visit to be of hostile intention, Einzig explains that they come in peace. They believe that Sora is the Spieler they have been looking for for millennia. Einzig, as well as the other Ex-Machina, begin to address Sora as ‘darling’ and state that they are here to perform the reproduction process with him.

After the Great War, a “hardware lock” has prevented Ex-Machina to reproduce unless it is carried out with The Compatible One, which they believe is the Spieler, who is Sora. After combatting Artosh, only 28 units remain and now leaving only 14 units functioning. Einzig is overdue for replacement for 5982 years and the entire race may stop working any day now.

This is followed by irrational conversations: Jibril’s short confrontation with the Ex-Machina and Sora express of dismay toward Einzig as getting too touchy. They also discuss the concept of the ‘heart’ from Prayer (implies Schwi, even though her name was never mentioned) and how all 14 units are sharing Schwi affiliation towards Riku, now they are desiring love from the Spieler/Sora.

Sora and the Ex-Machina are unable to reach an agreement, they then decide to settle this in a game of standard chess. The Ex-Machina layout the rules:

One day, Sora asks Holou for information on the Ex-Machina, to which Holou replies that she was in hibernation before the Ex-Machina were created, and only had woken up about 50 years ago when Miko reactivated her Quintessence. Basically, she only knows as much as Miko knows. While Sora brainstorming with Holou regarding the reasoning for the Ex-Machina mistaking Sora as the so-called “Spieler”, Holou answers Sora’s query with a question (somewhere along the line of): "Subjectively, what defines Sora? What makes me, me?", and that was Sora’s enlightenment.

Sora demands a new game with the Ex-Machina where he’ll be setting the game and its rules:

Sora & Shiro take turns leading the strategy in each set (since it’s a very fast pace game, they have to synchronise with each other’s anticipation). The game goes back and forth with both sides coming up with new strategies and counters after each set. They also notice that Sora plays much more sophisticated moves when Shiro is around. This is the first time the Ex-Machina realize Shiro may have some form of importance, however the story did not build on the parallel between Schwi and Shiro.

The Ex-Machina try to win the game by standard chess play, trying to use “stop moves" and psychological interference on Sora, via sexual seduction, but are unable to get a convincing win out of them, this is when Sora read their minds: "The more we analyze, the stronger they, Sora & Shiro, become." and Sora stated "When facing someone who killed the strongest, the Old Deus Artosh, I should have no chance of winning. So, Ex-Machina, you couldn’t have possibly been able to achieve that, you weren't the ones who killed Artosh, were you?"

After Sora & Shiro's 5 wins to 6 losses, Emir-Eins decides to reveal her trump card: she takes Sora onto the stage, dressed in a wedding dress, via dimension manipulation, and announces that she is Sora’s wife. Emir-Eins proceeds with her ‘winning strategy’, and announces that Sora has amnesia, a result in currently sharing his love with someone else. Emir-Eins continues to state that they are formally married and exchanged vows, and the Ex-Machina have already won the game because this, the marriage, is a proof that Sora is indeed the Spieler.

(Now, let’s talk about Emir-Eins. Despite not being the administrator, she seems to have strong individualism: she always wears a maid uniform, she is able to speak her thoughts unlike the other 11 units, she has a strong desire for Spieler/Sora, and gets in verbal arguments, specifically with Jibril. The plot didn't mention this directly, but it does imply that Emir-Eins, as a formal cluster commander, may have held a copy of the Prayer's memory, or Schwi)

Emir-Eins's dedicated act surprised everyone, including Einzig. Everyone concluded and convinced Emir-Eins that all those were her constructed memory, thus being false. Out of devastation and humiliation, Emir-Eins repeatedly requests for self-destruction or exile. Meanwhile, Shiro was not amused by the scene, perhaps being the first time Shiro is described to be angry.

With more very close fights and a lot more conversation, Sora & Shiro barely win set 12, triggering the Ex-Machina’s lost memory, which was Riku’s words (Riku’s conversation with Schwi, an Ex-Machina does not know who the voice is but conclude those are from the Spieler). The Ex-Machina are able to reach an understanding and Einzig gave the win to Sora & Shiro.

Afterward, the Ex-Machina leave, Einzig is to be replaced with a newly reproduced unit. Emir-Eins starts addressing Sora with his actual name and not Spieler, and proposes her love and desire to be his wife, where again, Shiro got very angry for that. Emir-Eins claims that she has approximately 6 years until her unit is out of service, and implies she’ll be staying with Sora until then.

As for a cliffhanger, the narrator states that Elkia will have internal conflicts within a month, Sora & Shiro will be dethroned and the Elchea Kingdom will be erased from the map. 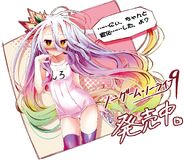 中文
Community content is available under CC-BY-SA unless otherwise noted.